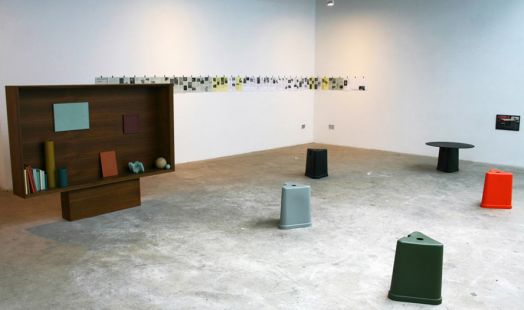 an exhibition by artist Ryan Gander and designer Michael Marriott.

Holding the sometimes-Brutalist architect and furniture designer Erno Goldfinger in high esteem, with both artists having referenced him in previous projects; he was part of the glue of Modern life that tied various streams of interest together for them both and is the anchor around which this exhibition has evolved.

Gander’s piece; LAX, is a re-presentation of one of his highly esteemed Loose-Association lectures - a series that began ten years ago and most recently performed at The Whitechapel Gallery in 2011.

Gander weaves subtle tapestries of fact and fiction. His idea-based practice, his handling of the details of life and his own biography, art history and the artistic process, even obscure fables and puzzles—all of these he synthesizes into myriad forms, from sculpture to installation, the printed word, performance, invention and intervention.

Marriott has a similarly broad approach as a product and furniture designer, whose practice includes exhibition design, curation and writing.

Here Marriott presents MMM or Mies Meets Marx, based on an exhibition he was commissioned to curate for the nearby Geffrye Museum in 2002. It comprised a combination of furniture and products by Marriott and many others, combined with found and anonymous objects, displayed in a way that suggested a non time-specific domestic urban interior. The title was inspired by a photograph of Groucho Marx sitting on a chair designed by Mies Van der Rohe, combining the otherwise opposite worlds of Hollywood and the Bauhaus.

Ernö Goldfinger (1902-1987) was an influential figure in the British modern movement, born in Budapest and studied architecture in Paris. After moving to London in 1934, he won praise for austere, yet sensitive projects, notably his Hampstead home, and drew controversy for ambitious schemes at Elephant and Castle and Poplar. As the next-door neighbour of writer Ian Flemming and as a result of their opposed views over the design of Goldfinger’s house, Flemming used his name for that of the villain in the James Bond film of the same name.

Groucho Marx (1890-1977) was a comic actor with 26 films to his name and is credited with inventing the garden path sentence of syntactic ambiguity and example of punning, double entendre, and antanaclasis; "Time flies like an arrow; fruit flies like a banana,"